Earlier, we showed you some ways to train your shoulders, back, biceps and legs at home, but the list is still far from complete. As we’ve discussed earlier, with the right exercise and some basic props, it’s possible to attack any muscle group even if you are stuck at home. The newest article in our at-home workout series examines how it’s possible to train your pecs in your own home. Do you work out at home? Do you want to put your chest muscles to the test? Sure you do, why wouldn’t you? Check this out for a series of at-home chest exercises!

Pectoralis major – the major chest muscle, a little anatomy and all the usual stuff

Pectoralis major is THE CHEST MUSCLE. The chest is almost completely made up of the pectoralis major, also known as pecs. There is no such thing as lower and upper – or, for that matter, outer and inner – chest muscles. There is only one chest muscle, which arises from the anterior surface of the sternum (strenocostalis head) and the anterior surface of the sternal half of the clavicle (clavicularis head). The lower fibers of the chest muscle make up the pectoralis minor. You cannot work this muscle separately. In other words, you cannot work your (nonexistent) “lower” or “upper” chest muscles separately. The pectoralis major works simultaneously with the pectoralis minor. They cannot move separately. The primary functions of the whole chest musculature are to rotate or adduct the upper arms. Therefore, you should primarily train them by doing presses and a few pulling exercises. This is important to clarify, as we frequently get questions relating to the kinds of exercises that could provide more load to the lower or the upper part of the chest, depending on which of these is less developed. 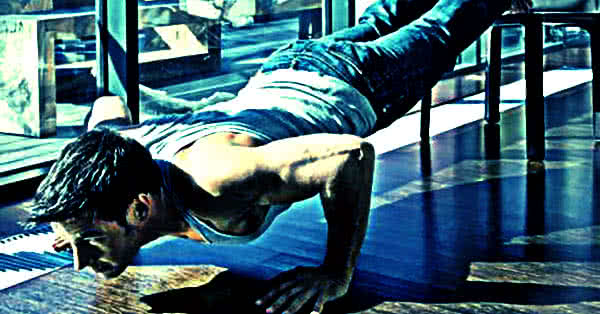 This is the point where genetics come into the picture – again... If you feel the lower part of your chest muscle is stronger or the upper part looks stronger, that’s not because you can train these areas specifically and develop this or that muscle part more efficiently as a result. Your chest muscle is shaped the way it is because of your genetics. That’s your luck. The simple truth is, the best you can do when it comes to your chest muscle is to attack it with maximum load each workout in order to build it as large as possible, no matter how dissatisfied you are with its shape. Don’t try to find tricks, magic methods or “upper-chest specific” programs, just train as hard as you can.

You don’t need to make a big deal out of it, even if you are working out at home. It’s possible to achieve great results with just a few props and your own bodyweight – don’t overthink it.

When it comes to at-home chest workouts, you’ll only need a few basic props – such as the usual dumbbells and a barbell – but you might want to get a bench that can be easily fit into a small space, too. Used benches can be purchased for a few thousand forints anywhere, but if you prefer a new one, get it here, for example. Once you have these, you’ll already be able to do the most basic press exercises, and you can also add flyes and pull-overs to your repertoire. The classic way of training your pecs is by doing free-weight exercises, but machines might make your life easier, especially if you suffer from joint problems (however, some free-weight exercises will work in this case, too).

It’s also okay if you only have a simple bench without a barbell holder, or, if you prefer a truly minimal style, work out using a cheap abs bench. In this case, you’ll primarily need dumbbells; a huge benefit of doing presses with dumbbells is the bigger, less limited range of motion. Plates might come in handy as well. 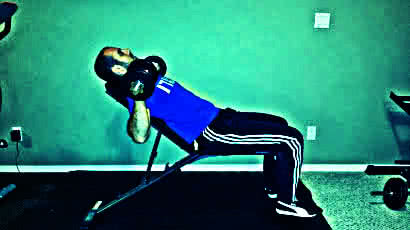 There’s no need to overcomplicate it: your workout regime can be mostly made up of bench and inclined bench press exercises as well as flyes. You can do narrow or wide presses, work on a horizontal or an inclined bench, press with dumbbells or a barbell, do pull-overs or dips, but make sure to include flyes as well. These are the most important exercise types. You would do the same in the gym, maybe with some additional machine presses and flyes. Okay, you will miss out on 1 or 2 cable exercises, but those are not essential, anyway. When you work out at home you have to make do with limited possibilities, but that’s not the end of the world.

What’s really important is that you want to achieve results even if you don’t have a bench, only an adjustable abs bench and a few dumbbells. Let’s look at a program that you can follow even in such circumstances: 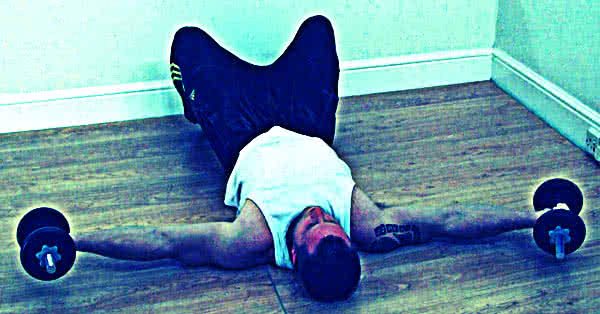 If there’s no available bench in your home, make sure to get one. It’s only a minor financial investment – especially if you buy a second-hand bench – but you’ll have a lot of fun coming your way if you get one. The program consists of 14 sets that will surely give you some nice, sculpted chest muscles if you perform them with the appropriate level of intensity and pair them with the often-mentioned healthy diet. Having limited access to dumbbells might require applying some intensity increasing techniques such as super sets, drop sets, or occasionally doing the exercise until failure.

We intentionally excluded floor presses from the list; if you think you would benefit from this exercise, feel free to do it, but the limited range of motion (especially in the case of people with long arms) virtually takes away the essence of it. If you don’t have a bench – but you are determined enough – you can replace it with a fitness ball for doing presses.

It’s also possible to work out without props – but don’t expect results as spectacular as in the case of the version above. The majority of this program is made up of innumerable push-ups and push-up variations (wide, narrow, with propped up feet, etc.) as well as dips, depending on your circumstances. If you have dumbbells, you can at least do flyes, which is an incredibly useful exercise. In case you don’t have the possibility to do weighted presses, flyes will be your second best friend after push-ups. Once you get the technique, you can shred your chest muscles until you drop by doing flyes. The emphasis is on high reps – occasionally, you can even repeat the movement until failure – and make sure to have a few extra plates, as it’s relatively easy to get used to the exercise. 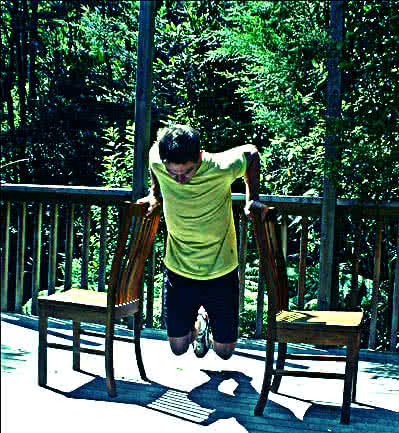 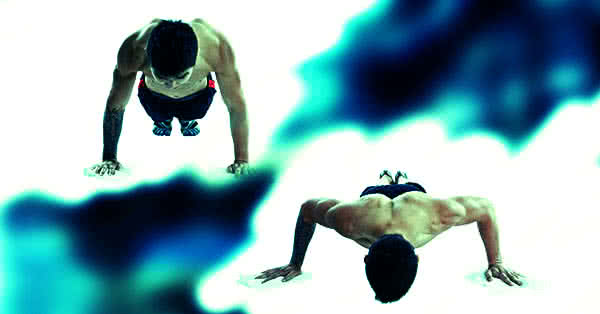 Let’s admit: you won’t get into beast mode while doing this exercise, but it’s better than nothing. We’ll work with 14 sets again, which will already have an effect, especially if you include some smart push-up variations. Extra intensity should be a given above a certain level, and make sure to throw a few intensity increasing techniques into the mix as well.

The programs outlined above serve as samples that can be modified according to your taste and possibilities. Although you shouldn’t expect to develop competition-ready muscles by doing them, you will be able to achieve an approximately gym-level shredding effect with some basic props such as a bench and a good amount of weights. For this, however, you’ll also need a certain level of brain-muscle connection that you can acquire by doing free-weight training. Your home is a great place for establishing a free-weight workout regime, which will help you feel like a kid in a toyshop when you finally get back on track in the gym. :)

You see? Even your pecs can be trained well at home, all you need to do is align your program with your circumstances, then plan and build it the same way as you would in the gym.

We have already trained back and legs at home. Now it’s time for biceps! You can hit your biceps hard at home, even without any serious equipment. Want to know ...
Push-up training program for home

This home push-up training program can give you a good basis for future work in the gym. In the following, we are presenting you an example for a home push-up t...
Home back workout

Our series of short articles on home workout goes on, with another muscle group that is mostly considered impossible to train at home, or at least with very low...