Shopbuilder Articles / Bodybuilding and fitness articles / Everything about weight training / Intensity or volume: which one is better for growth?

Intensity or volume: which one is better for growth?

The debate has been going on for decades: Is the intensity or the volume i.e. quantity of training more important for growth? Before going into more detail, however, there are a few basic concepts we need to clarify.

What is “heavy enough”?

Let’s see what studies say: if we look at the effect of load (intensity) vs volume on a large enough sample, we might see a few basic tendencies emerge. Data from over 70 hypertrophy-related studies were collected and published in the Sports Medicine magazine in 2007. These studies revealed that the highest hypertrophy was reached generally when the subjects used 65-85% of their one-rep maximum (1RM). Interestingly, increasing the load from 65% to 85% did not result in proportionally more growth of muscle mass, or faster growth. Relatively similar results from such a wide load range indicated that there must be some kind of limit. As soon as you exceed this limit, you will experience decreasing efficiency in parallel with increasing intensity. What it means in the world of iron: once you have reached the limit for load that can effectively trigger hypertrophy, it’s no use increasing the weights further, as your results will not be proportional to the increase in load. Increasing weights will only work until you reach the load limit that will stimulate the highest hypertrophy based on your strength and fitness level (editor’s note: more evidence for the fact that there is no point in “training for your ego”).

What about volume? Controversy regarding the optimal number of sets is rooted in studies that imply there is no significant difference between the hypertrophy-causing effect of doing one set or several sets for a given muscle group. But if we take a closer look at these studies, we might see what causes these conflicts. Most of these studies were conducted namely on unfit individuals. This means that the load limit of their musculature was very low, so even a small volume was enough for them to show some progress. Furthermore, studies that didn’t show any considerable difference between the effect of one set and several sets were all short-term experiments. None of them took longer than 14 weeks. Basically, all they could demonstrate was that unfit individuals could reach the limit that was required for stimulating hypertrophy by doing one single set, and exceeding this limit did not bring proportionally more growth (editor’s note: beginners may show spectacular development even with little training. Never heard that before, did you?). These results have been questioned by many. Because, what about those who are not beginners? Everybody knows from experience that if you have years of training behind you, you wouldn’t see any development if you only went to the gym for one set. Later, longer term studies were also conducted, with the load being adapted to each individuals’ fitness level. In these studies, doing more sets proved to be effective.

But needless to say, volume is more than just the number of sets. The total number of repetitions can also be an indicator of training volume. Moreover, this can be a more accurate indicator for how long your muscles are actually under load. In most training plans, there are 8-12 reps for one-set workouts and 24-36 reps for workouts with several sets. Based on the analysis mentioned earlier (the one that was based on 70 studies), hypertrophy can be achieved through multiple combinations of sets and reps. However, the highest anabolic response appeared in the range of 30-60 repetitions per muscle group. Taking the chest for example, a total number of 30-60 reps per workout proved to be effective.

Which is more important?

None of them. I mean, both. You will reach the best results by the right combination of both. If you train on the 75-85% of your 1RM and do 30 reps per muscle group for upper body and 60 for lower body each time, chances are high that you are in the most anabolic range, both regarding intensity and volume. (Editor’s note: this might seem too little. We are missing one important factor: frequency. Because, 30 reps e.g. for back may be enough in a full-body routine, but will definitely not suffice in a split routine, when the back would be trained only once a week).

Written by coller, based on an article in Flex Magazine

Most popular this month
Straight Sets vs. Pyramid An eternal question many want to know the answer to: is the straight set or the pyramid pattern a more effective training method? Let’s see ...
Pump your biceps to the next level! We are delighted to see how our readers liked the article about working the pecs using a high rep routine. So here comes another version tha...
What lags behind is your chest? Work some extra, that’s the best! Phil Heath won the Mr. Olympia in 2011, defeating his former mentor Jay Cutler. But what kind of dietary and training regimen did the youn...
Brutal Branch Warren leg workout 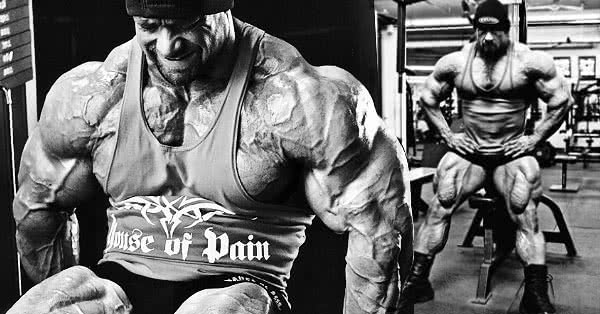 A champion can always say something new. You can always learn some new tricks you can incorporate in your training program. Some of these mi...