The Ketogenic Diet was originally developed for treating children with epilepsy, as a complementary treatment or an alternative for medication.

This is diet is high on fat and low on carbohydrates, which enables the body to gain energy from fats instead of carbohydrates (i.e. by breaking them down to glucose). The liver breaks down fats into fatty acids and ketones. The latter can be utilized by the body to gain energy. The metabolic state of ketosis simply means that the quantity of ketone bodies in the blood have reached higher-than-normal levels. Experience has shown that this diet can help control seizures in some people with epilepsy.

Glucagon is on the other side of the spectrum; it is insulin's antagonistic hormone. This means, it has the opposite effect. Glucagon is also secreted by the pancreas when insulin levels drop. This usually happens when a person skips meals, or does not consume adequate amounts of carbohydrates for an extended period of time. When this happens, glucagon is secreted by the pancreas to break down stored glycogen in the liver into a more usable form, glucose. But what happens if the glycogen depots of the liver are depleted? That’s when the body gets into the state of ketosis, since the pancreas can also break down free fatty acids to ketone bodies.

What is a ketone body?

Ketone bodies are produced in the liver during the Krebs Cycle (also known as the citric acid cycle). If there is not enough glycogen for the body to break down, the pancreas secretes glucagon. Glucagon is a catabolic hormone. Its function is to provide energy for the body. To ensure that, it can break down various chemicals that may function as a potential source of energy (i. e. glucose). In a ketogenic diet, glucagon is essential, since it converts free fatty acids into energy substrates like ketone bodies. Ketone bodies are free fatty acids (=hydroxybutyric acid and acetoacetic acids) broken down by carnitine and glucagon.

In a classic ketogenic diet, the ratio of dietary fats to proteins+carbohydrates is 4:1. This is basically accomplished by excluding all types of high-carbohydrate food e.g. fruit, vegetables of high starch content, pasta, bread, sugar and other sweeteners. Sufficient fat intake may be provided by milk, cream or butter. 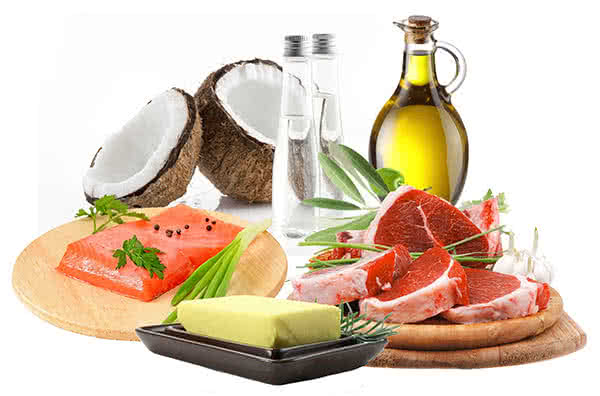 Long-chain triglycerides (LCTs) usually make up a high proportion of fat intake. However, medium-chain triglycerides (MCTs) are better for a ketogenic diet. For this reason, in a special variant of this diet, palm kernel oil or coconut oil (MCT oils) are used to provide about half of the total energy supply. Since this variant of the diet requires less fat intake, it allows consumption of somewhat more and more diverse types of proteins and carbohydrates.

The amount of fat is calculated from the daily caloric needs and the ketogenic ratio. The amount of protein is adjusted to support the growth and maintenance of the body. And carbohydrates fill in the amount left as per the ketogenic ratio. Carbohydrates coming from drugs or supplements should be included, too. The daily diet plan is compiled based on these data, splitting up the total amount of nutrients among several meals of the day.

The main ingredients are: heavy cream; typically meat as a protein source; vegetables or fruit, and fat sources like butter, vegetable oils or mayonnaise. Only low-carbohydrate vegetables and fruits are allowed. This means, banana, potato, pea or corn are excluded. Both vegetables and fruits are divided into two subgroups each, based on their carbohydrate content; ingredients within the same group are considered equivalent. For example, broccoli, cauliflower or green beans are equivalent. Fresh, canned or frozen ingredients are equivalent, while raw ingredients are not equivalent with cooked ingredients. All ingredients shall be measured accurately, by the gram. Patients should consume the full portion and cannot have anything extra. Snacks should also be included in the total amount of nutrients. A small amount of MCT oil may be used to cure constipation or to enhance ketosis. The classical ketogenic diet is not a balanced diet.

1 The main benefit of ketosis is that it increases the body's ability to utilize fats for fuel through ketone bodies, which gets very lazy on a high-carbohydrate diet. When on high-carbohydrate diets, the body can usually expect an energy source (=glucose) to keep entering the body. But in the state of ketosis, the body has to become efficient at mobilizing fats as energy.

2 Ketosis has a protein-sparing effect, assuming that you are consuming adequate quantities of protein and calories in the first place. Once in ketosis, the body actually prefers ketones to glucose. Since the body has copious quantities of fat, this means there is no need to oxidize protein to generate glucose through gluconeogenesis.

3 Another benefit has to do with the low levels of insulin in the body, which causes greater lipolysis and free-glycerol release. Insulin has a lipolysis-blocking effect, which can inhibit the use of fatty acids as energy. Also, when insulin is brought to low levels, beneficial hormones are released in the body, such as growth hormone and other powerful growth factors.

4 Another small but very important benefit of the ketogenic diet is that when in the state of ketosis, ketones, along with a high protein intake, seem to suppress appetite. Because you have to consume a lot of fat on a ketogenic diet, which hold 9 calories per gram (more than twice as much as carbohydrates, which contain 4 calories each gram), you are not getting much food volume. 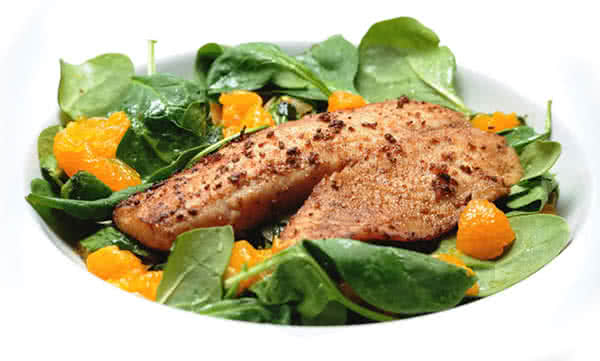 1 Although ketone bodies are produced from fats, the amount of energy produced is about 7 calories per gram (as much as the energy provided by alcohol).

2 During the first few weeks of the ketogenic diet, the body has to go through the "metabolic shift". While going through this, the body will experience a small degree of fatigue or brain fog

3 Blood-lipid profile is also a concern on the ketogenic diet due to the staggering amounts of saturated fats (heavy cream, butter, fatty meat etc.) in the diet, although the diet can be centered around healthier unsaturated fats—which isn't as fun as eating an egg and cheese omelet, fried in butter, with bacon on the side! Changes in blood cholesterol levels (in both directions!) have also been observed, which is another evidence for the fact that diet has not much impact on blood cholesterol levels (up to about 30%).

4 Because carbohydrates are restricted, the issue of micronutrient deficiencies can occur. The best thing you can do to avoid this is take a multivitamin of high quality. However, you need to be cautious: use only approved and safe products. By cutting down carbohydrates, you will most likely fail to ingest the recommended daily amount of fibers (25 grams) in a ketogenic diet. This, and excessive fat consumption can slow down bowel movement and cause unpleasant digestive problems. You may reduce the risk by trying to eat as much vegetables, brown rice or whole grains as possible without compromising the 4:1 ratio.

5 The most dangerous potential consequence of an uncontrolled ketogenic diet is ketoacidosis. Ketoacidosis occurs when the level of ketones in the blood gets out of control, which poses a severe health risk for diabetics. When massive quantities of ketones are produced, the pH level of the blood drops, creating a high-acidic environment that goes beyond homeostasis. And this might even be deadly. Nondiabetics need not fear, as the regulated and controlled production of ketone bodies allows the blood pH to remain within normal limits.

Every reduced-calorie diet is catabolic, meaning the diet can cause you to lose muscle. Especially during gluconeogenesis, when the body is trying to restore the glucose levels from protein. To prevent this, it might seem logical that the brain chooses ketone bodies over glucose. This way undesirable glucose synthesis from protein can be avoided.

Another research, which was conducted among bodybuilders on a very low carbohydrate diet (5.4% of total calorie intake), has shown a slight decrease in body fat and a slight increase in performance. In this diet, the subjects consumed 386 calories less in total, while the amount of protein was increased by 56 calories. However, it could not be stated clearly whether loss of body fat and increased performance was due to the low carbohydrate and high fat amounts or the reduced calorie intake and the increased amount of protein.

Furthermore, there was a great dispersion among individuals, depending on age, sex, training regimen, muscle fiber composition, glycogen levels or genetic traits.

For example, subjects with a higher insulin sensitivity will lose more weight on a high carbohydrate, low fat diet; while individuals less sensitive to insulin can achieve better results with a low carbohydrate, high fat diet. It also goes for the group of bodybuilders that a diet that is tailored to the individual, with a balanced intake of micro- and macronutrients is inevitable for performance, and so is monitoring on an ongoing basis.

For the group of individuals who were doing resistance training, more research is required before any recommendations could be drawn.

And most of all, you should get an extensive medical checkup and consult a physician before trying the ketogenic diet. The ketogenic diet strongly deviates from a balanced and healthy diet. Remember: originally it was designed for a specific group of patients with a specific disorder. When on a ketogenic diet, continuous monitoring is essential to ensure that the body remains in the state of homeostasis.

Shop.Builder monthly most popular articles
Muscle Memory: the Only Refuge After a Layoff

For some people, working out is the most unforgiving sport in the world. We suffer for months and years to achieve a well-built, lean and mu...
The most common ab workout mistake

Breathing is a lot more important than you think when it comes to ab training. If you are not breathing well in your ab workout, it may ruin...
Top 10 muscle building moves

“What’s this bullshit” you might think to yourself: “Food is the alpha and omega of muscle gain.” And you would be right. We have told you s...
Alps—Biceps Training with a Pinch of Philosophy, Arnold’s way

One of the most spectacular parts of Arnold’s legendary physique was his extremely peaked biceps. Wanna learn the recipe of 60-cm guns? Read...
Train like Navy SEALs!

Navy SEALs are really tough guys. They have to hold on in all kinds on different circumstances. And they have to maintain a constant state o...
Curl-up vs. Sit-up: which one is better?

Thousands of people do sit-ups by the hundred, hoping to get six-packs. This article will show you which muscles you actually use for sit-up...
7+1 Mistakes You Should NOT Make While Bench Pressing

Bench press is one of the most popular exercises. But if you do it wrong, that can be not only ineffective but dangerous as well. Let’s see ...
Phil Heath Mr. Olympia workout and meal plan