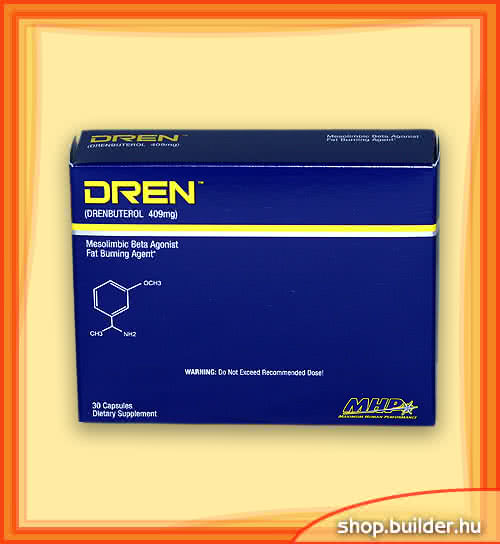 YOU’VE BEEN WARNED! DREN WILL TRANSFORM YOUR BODY AND ALTER YOUR MIND

DREN™ is not for everyone. Even hardcore ephedrine junkies who were popping 50 to 100mg per day in their ECA stacks consider the fat burning and euphoric effects of DREN to be extreme. The word on the street is that DREN is like taking a ‘hit’ of pure adrenaline stacked with ephedrine. So what the hell is DREN you ask? DREN (Drenbuterol) belongs to a powerful new class of compounds called mesolimbic beta agonists, which have extremely powerful fat burning and euphoric activities. DREN stimulates both metabolic and mesolimbic pathways for extreme thermogenic fat burning and neurotropic “feel good” sensory. Each DREN capsule provides the maximum 409mg dose of Drenbuterol and should only be administered once daily and not used with other stimulants. When taken as directed, DREN will help potentiate thermogenic fat burning, increase energy levels, suppress appetite and illicit a state of heightened mental euphoria.

DREN stimulates lipolysis as well as psychoactive activity by using the newest, most powerful and exciting fat loss ingredient in existence called Beta-Methoxy PEA (exclusive to DREN). Please pay special attention to the word Methoxy and do not overlook it, as it makes all the difference in the world and is one reason why DREN?s effectiveness is simply unmatched.

Unfortunately, in response to beta-adrenergic stimulation (just what happens when taking Ephedra), negative feedback mechanisms are activated as well. Stimulation of the Alpha 2 receptor as well as the production of phosphodiesterases and adenosine occurs. The alpha 2 receptor, phosphodiesterases and adenosine try to slow down or halt the fat burning process which is the reason why caffeine and aspirin were often added to Ephedra products. Caffeine and aspirin overcame much of the negative feedback mechanisms and made Ephedra even better. DREN is no exception because it works in many of the same exact ways that Ephedra does (but even better) so measures had to be taken to maximize its actions in the body and minimize these negative feedback mechanisms.

In addition to Beta-Methoxy PEA, Caffeine, Yohimbine HCL and 5-HTP have been added to the formula. Yohimbine HCL has been added to the formula as it increases the effectiveness of DREN by its actions on the Alpha 2 receptor while Caffeine has the ability to inhibit phosphodiesterase activity and interfere with the adenosine receptor. This combined with its ability to prevent some noradrenaline re-uptake increases the effectiveness of DREN in a synergistic fashion. 5-HTP has psychoactive actions in and of itself as well as synergisms to the overall fomula.

Beta-Methoxy Phenethylamine, or B-M-PEA, is an alkaloid and monoamine. In the human brain, it is believed to function as a neuromodulator or neurotransmitter and elicits extreme psychoactive effects on the body while burning body fat at an unforseen rate. Beta-Methoxy Phenethylamine enters the brain and triggers a cascading release of norepinephrine, dopamine and serotonin and stimulates the mesolimbic reward pathway, causing euphoria and excitement.

As a sympathomimetic, Beta-Methoxy PEA acts to stimulate the sympathetic nervous system. It does this by causing pre-synaptic nerve terminals to release norepinephrine, or what is commonly called noradrenaline (NA), into the synaptic space. It also has the effect of increasing circulating adrenaline, the body?s chief beta-2 agonist. Noradrenaline, once released into the synaptic space, interacts with adrenergic receptors on the surface of adipocytes (fat). This initiates a sequence of events within the adipocyte that increases lipolysis (the breaking down of fatty acids) by the enzyme hormone sensitive lipase (HSL). This fat burning effect is dependent on long and steady activation of the receptor by the agonist and is what makes Beta-Methoxy PEA much more effective than other B-PEA Formulas.

Beta-Methoxy PEA is the most effective B-PEA beta-agonist by virtue of its long half-life (stays in the body longer) as well as its affinity to be absorbed in fat tissue. In contrast, the half-life of many other Beta-PEA forms is only minutes as the enzyme MAO-B quickly metabolizes them. This prevents significant concentrations from reaching the brain and therefore no psychoactive and weight loss effect is achieved. Beta-Methoxy PEA does not have to worry about being broken down by MAO-B due to its unique configuration. The beta ?Methoxy? moiety on this compound protects it and allows for increased absorption across the blood brain barrier and deep penetration into the fatty tissues of the brain where it interacts with the adrenergic receptors.

This unique configuration or moiety is what gives it its long duration of action and exceptional ability to permeate fat tissue. So it is the ?Methoxy? in Beta-Methoxy-PEA that makes it simply unmatched to all other forms of Beta PEA no matter what jargon you read.

As mentioned above, the stimulation of the Beta-adrenergic receptor also unfortunately means the activation or stimulation of the alpha 2 receptor that inhibits the release of noradrenaline. Thus, by binding to this receptor, noradrenaline functions as its own negative feedback signal, shuts off its own release and thermogenesis is turned off. Yohimbine HCL is a selective alpha 2 antagonist and can thus short circuit this feedback loop, maximizing noradrenaline levels, thus maximizing the overall fat loss actions of Beta-Methoxy PEA.

Stimulation of Beta-adrenergic receptor also means an increase in phosphodiesterase and adenosine activity. Phosphodiesterases (PDE?s) act to hydrolyze cAMP into inactive fragments while adenosine inhibits cAMP accumulation halting the stimulation of HSL and the fat burning process. Caffeine possesses the ability to inhibit phosphodiesterases within the cell and has even been shown to have the ability to prevent some re-uptake of norepinephrine while also acting as an adenosine receptor blocker. Both of these properties make caffeine an important adjunct to the overall formula of DREN to enhance fat loss.

5-HTP is a naturally-occurring amino acid, a precursor to the neurotransmitter serotonin which is a monoamine neurotransmitter with feel good and appetite suppression properties. 5-HTP passes through the blood brain barrier into the brain and its psychoactive action is thought to derive from its effect on serotonin synthesis in central nervous system tissue. It is believed that a high supply of 5-HTP causes the brain's serotonin-producing neurons to increase production leading to increased serotonin release. The serotoninergic system is known to modulate mood, emotion, sleep and appetite and thus is implicated in the control of numerous behavioral and physiological functions. 5-HTP helps to keep serotonin and norepinephrine levels in balance therefore increasing metabolism and fat loss through synergistic actions.